My two teenage daughters are involved in a serious traffic accident when the pickup truck they are in, runs a red light and t-bones another car. They weren’t wearing seat belts.

One daughter had major forehead lacerations clear to the skull plus concussion with bleeding. The other daughter had a concussion plus internal injures. (She had to be dug out from under the dashboard.)  While both daughters spent at least a week in the hospital, no operations or major treatments were necessary. 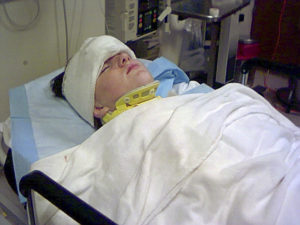 The boy driving was uninjured and one of my younger daughter’s friends escaped major injury with only a broken nose. The lady in the other car was injured but not seriously.

A month later both daughters were both back at school as if nothing had ever happened. (The only lasting scars were emotional scars suffered by the parents – who aged 10 years that month.)

And how was this possible?

The same protection enjoyed while hiking the remote areas of the state, are obviously also protecting the rest of my family.