It was time to explore some more of the San Rafael Swell. David and I headed to Green River Utah and then headed west on I-70 freeway. When the freeway breaks through the Swell, there is a rest stop on the north side. We stopped and were looking over the edge of the wash when we noticed a small Class D arch just below the sidewalk. We called it Restroom Arch and continued our drive westward. 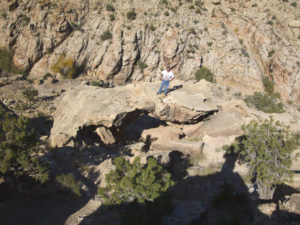 The next stop was in the Head of Sinbad area where we had to switch to dirt trails, some times in four wheel drive. On the north side of I-70 we visited some Ancient Indian petroglyph sites. 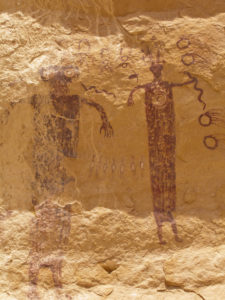 By skirting through the cliffs northward, we managed to reach the edge of Cane Wash where we documented a Class C cliff wall arch we obviously called Cane Wash Arch. This arch was mostly just a crack in the back of a cliff alcove but since the crack created a visible hole, it qualified as a natural arch. 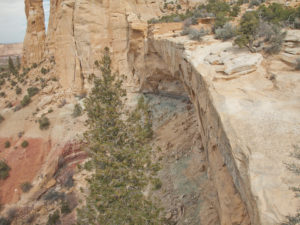 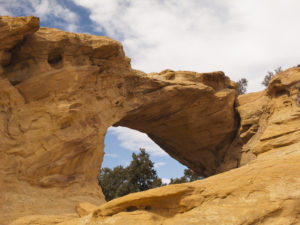 We then continued on the dirt road heading northwest to the head of the north arm of the South Fork of Coal Wash. Chimney Rock is visible just to the west of this point. 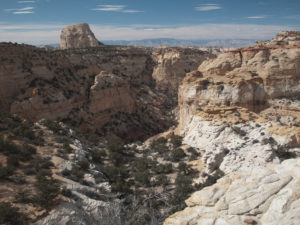 I had thought about continuing northwest on this jeep trail but the trail quickly became ugly and we had to rethink our plans. While we were considering our options, a group of ATV riders appeared on the road heading towards us. ATV riding was rather new to us so we pulled over to watch them pass. There were young riders as well as older people. Some were rather overweight and yet they did not have any problem with the rocky terrain. In all, there were about a dozen of all sizes and genders.

Then a light went off in my head! I needed an ATV! Better yet… we needed two ATVs. And a trailer to pull them to wherever we needed.

So instead of heading down the rocky parts of the trail (one large ATV lady had pulled over to let us know that our vehicle was NOT going to make it much further on that trail) we headed back to the I-70.

We then took a culvert under I-70 to the south side of the Head of Sinbad area. We made a quick stop at a side canyon to the west so I could take a picture of the ‘Lone Warrior’ pictograph. (A lovely little devil, I would say.) 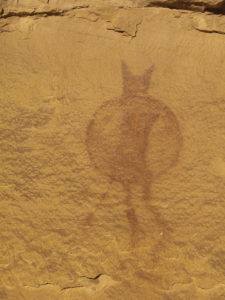 We then continued north to the Swasey Cabin historical site. 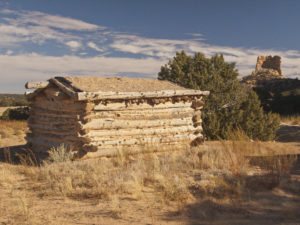 At the cabin, we parked so we could walk around the nearby rocks to the southwest of the cabin. Here there was a hidden cave that included a double Class C natural bridges called Ice Cave Double Bridges. 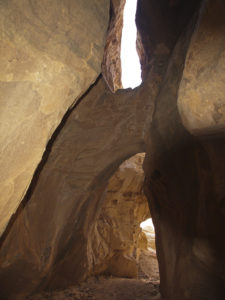 As we were working our way to the entrance of this cave, I noticed a “Geocache” hidden in the rocks. Geocaching is becoming a popular hobby with directions to thousands of geocaches all over the world. Even though we hadn’t been looking for this cache, we added our names to the list of people that had located the cache anyway. Sometimes the cache includes trinkets or coins that people add or take to include in another cache somewhere else. (Someone needs to come up with a way to make money on this concept or at least make it worth your effort.)

On this walk, I noticed some wildflowers blooming called Skyrockets (Ipomopsis Aggregata). This is not a wildflower I see often in Utah. 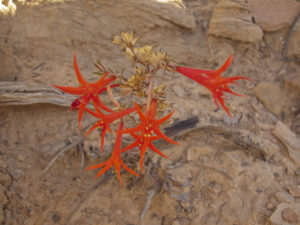 And it looks like a good year for juniper berries. 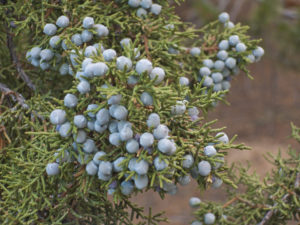 Back at the cabin we then made our way around the east end of the cliffs where another cave was found. This cave was the ‘refrigerator’ for residence of the Swasey cabin. There was a long metal bar embedded in the side of the rocks making a handy larder hanger. 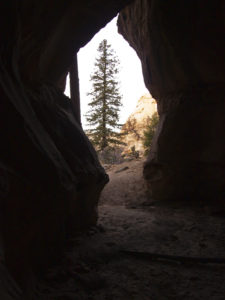 To the southeast of the cabin, a small Class D arch can be seen high in the cliffs. We decided it could be called Swasey Cabin Arch. 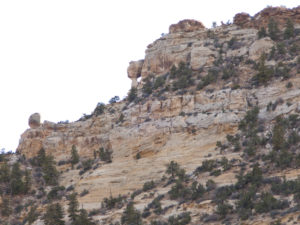 The day was getting long and we wanted to check out the jeep trail that passed the Swasey cabin down into Eagle Canyon but that was going to have to be another trip. 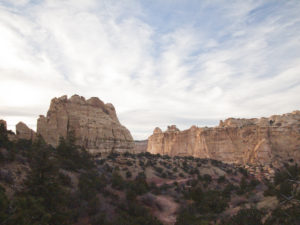 It was time to head home again.