East of Price Utah there is a canyon called Range Creek that, for the last 50 years or so, has been private property owned by the Wilcox family. The property had recently been sold by Waldo Wilcox to the Utah Division of Wildlife Resources and limited access was made available to the public. Like nearby Nine-Mile Canyon, Range Creek was becoming famous for the large amount of ancient Fremont Indian ruins and petroglyphs. The owners of Range Creek were very protective so much of it was pristine and untouched.

As much as I wanted to see this area, we were also interested in documenting a class “B” natural arch that kept showing up in pictures of Range Creek.

The University of Utah through the Carbon County Recreation department, was given the task of regulating the limited guided tours that would have access to the canyon. My wife, my brother David and I each paid the $50 fee to get on the list and on the next available guided tour. Our turn came up for Saturday July 15th.

The next morning, we met in Price and loaded ourselves into the vans. We then traveled southeast down the highway towards Green River and turned east to go up Horse Canyon to the top of the Book Cliffs. It was then quite a drive on the dirt roads until we descended into Turtle Canyon which finally joins the Range Creek near the head of the canyon. Here we had to wait a while for an armed BLM officer to join us and unlock the gate. This BLM officer then shadowed us for the rest of the day to make sure we didn’t pick up anything or get off the trails.

Most of the Indian ruins and petroglyphs had to be observed from the dirt road but there were several stops to walk side trails to different dwellings or rock art. It was wonderful country! However, the “tour group” status really made me crazy. I really wanted to ditch the group, get off by myself and REALLY see this country. But there was this BLM guy… and his gun… 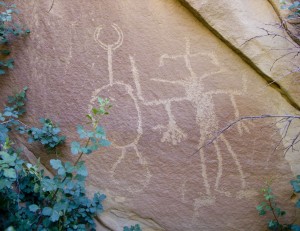 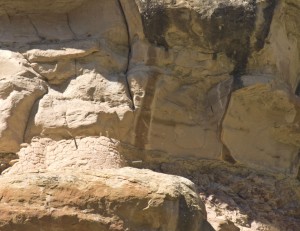 When we got to where the natural arch could be seen in the high cliffs, the group made a special stop just for David and I. The sun was in a lousy place to get a good picture so they promised to stop again on the way out, just for us. 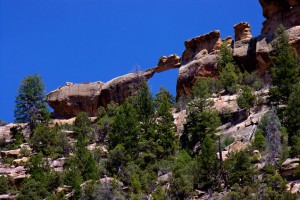 Towards the bottom end of the canyon, we stopped at the ranch house and cabins for lunch and a rest. This gave us a chance to take pictures of the ranch and talk with one of the team leads for the research that the university was conducting. It was very pleasant there under the big cottonwood trees. Very peaceful. I was jealous of those that got to stay in the canyon all month. 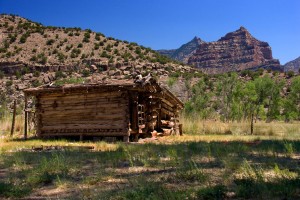 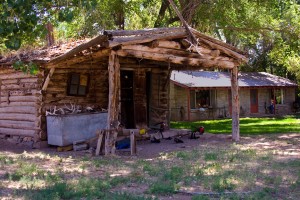 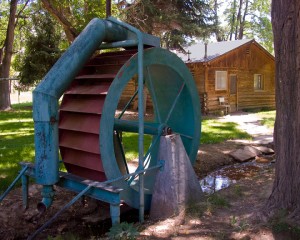 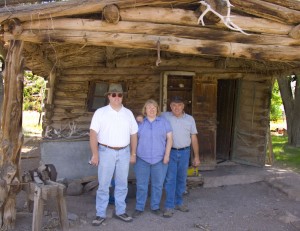 Finally it was time to head back up the canyon again. We did get to stop for better pictures of what we found out was called Budge Arch after the nickname of Waldo Wilcox’s father.

Then it was a long bumpy ride back over the mountain and down Horse Canyon to the highway back to Price. We then loaded up the Explorer and headed home again.