Thursday August 23rd, David and I finished work for the day and headed south with our camping gear loaded in the back of my Ford Explorer. We had both taken Friday off from our jobs so that we could use a long weekend to explore another part of southern Utah. This time we were heading for Lavender Canyon at the south end of Canyonlands National Park, northwest of Monticello Utah.

We made it as far as Moab Utah that night and drove to The Needles visitor’s center for Canyonlands National Park the next morning. There we purchased access permits for the Canyonlands National Park end of Lavender Canyon. We then spent the next several hours bumping our way along the jeep trail up Lavender Canyon to the park boundary. (At 2 mph, it is a long, long drive.) The trail from Davis Canyon, around the mesa into Lavender Canyon was especially challenging because of the flooding damage that had occurred this year.

Once we arrived at the park boundary, we unlocked the gate and continued driving up the dry creek bed. We drove as far as we could up Lavender Canyon, visiting a wonderful class A natural arch called Cleft Arch and nearby Lavendar Point Arch as well as Teapot Arch. 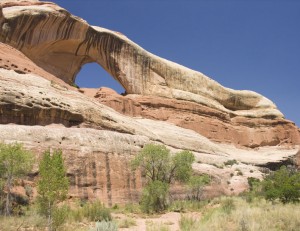 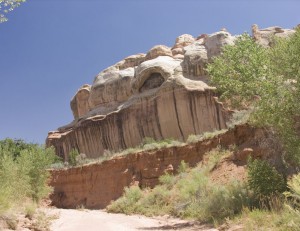 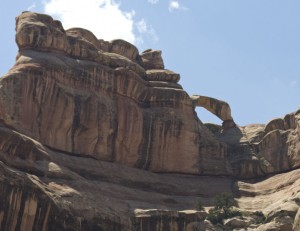 We also hiked up a short side canyon to take pictures of Indian ruin hiding in the cliffs. On the way back we also took pictures of Musk Ox Arch. 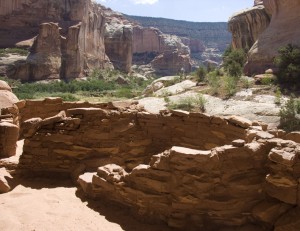 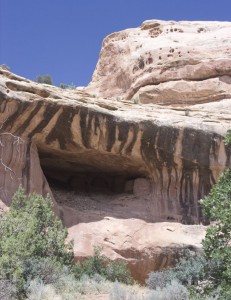 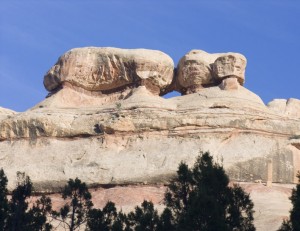 We ended the day hiking up another side canyon to the southeast to look for a natural arch called Elusive Arch that we understood was up there. The late afternoon shadows kept the hike from getting too hot and about the time we were going to give up looking for the arch, we found it. 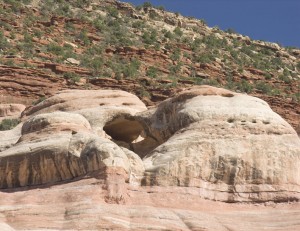 We set up our camp just outside of the park, near a natural arch we called Campsite Arch. This was a natural, protected area next to the cliffs that is a perfect place for camping. After setting up camp, we still had a little time to explore the local area before sunset. 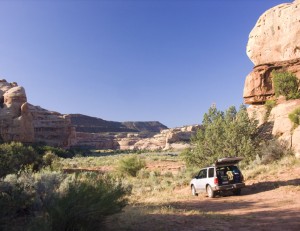 What a wonderful canyon to be in as the shadows grow long and the sky turns to stars. It was magical!

Then a nearly full moon came up that was bright enough to almost be able to read by. In fact, it was so bright all night, it almost made it hard to sleep.

The next morning after breakfast, we loaded up the camping gear again and opened the locked gate into the park again. We then drove up the dry creek bed to the West Fork of Lavender Canyon. Here we hike up the West Fork to take pictures of the natural arches called Long Arch and West Fork Lavender Arch. 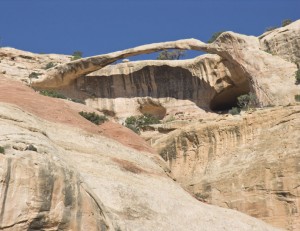 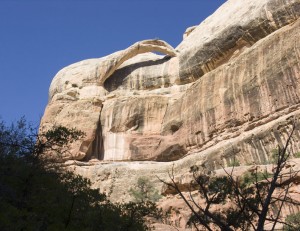 This was a delightful morning hike that kept us in the cool shadows of the cliffs for most of the day. Along the way, David found a number of spent bullet slugs from someone that appears to have fired a number of times directly into the ground. I wondered if someone had eliminated a rattlesnake problem at some time in the past.

There were a few challenging spots in the side canyon but we reached the natural arches that we had been looking for.

By the time we started down the canyon, the canyon walls no longer provided much shade. In fact it got hot quickly making the hike down the canyon not quite so enjoyable. On the way back, we also took some time to take pictures of two more natural arches called Wallpaper Arch and Sun Shade Arch, which were just around the corner from our campsite. 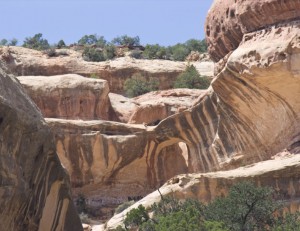 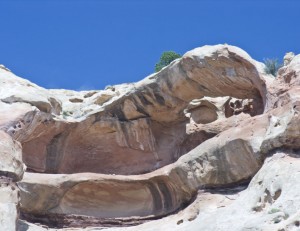 By the time we reached the Explorer again, we had used up most of our hiking strength for the day.

I LOVE THIS AREA! I really would like to spend more time here so I could explore every side canyon and every cliff. 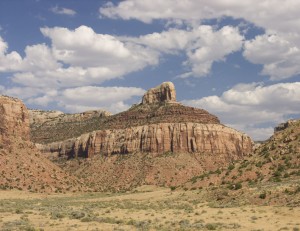 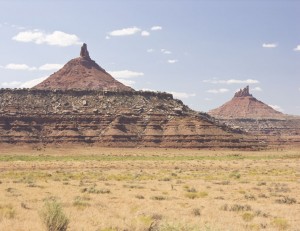 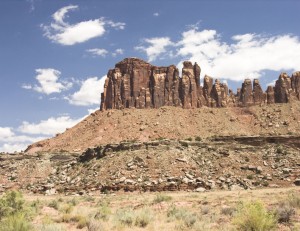 Unfortunately, the spirit is willing but the flesh is week. We had hiked as much as our bodies were going to let us. It was time to head for home again. Heading home on Saturday evening allows us to recover all day Sunday and be rested enough for work on Monday morning again. (Oh boy…)