It was summer and hot but David and I still wanted to get out for at least the day. Saturday morning, we headed for Moab Utah.

Instead of heading into Moab itself, we turned off the Canyonlands National Park “Island-in-the-Sky” road heading west and then south to the top of the mesa. We then took the Gemini Bridges road east to Arth’s Pasture.

On the way, we stopped when the road approached Bull Canyon so we could take pictures of Calf Arch on the opposite cliff wall.

We then picked our way on jeep trails heading northeast until we were almost to the rim of the cliffs overlooking Moab Canyon and the highway into Moab Utah.

We first visited Jack’s Arch hidden in the rocks at the north end of Arth’s Pasture. We were surprised that the jeep trail hadn’t gotten much use since the last time we were there several years ago. 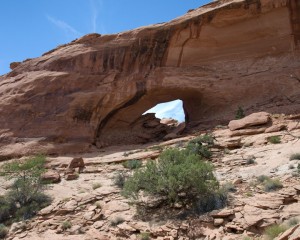 After taking pictures of Jack’s Arch, we tried hiking up the edge to get a view of Double Eclipse Arches by approaching from the south cliffs. However, it was WAY too hot to be hiking and the short hike about killed us. When we finally got to a cliff where we could look across the short canyon to Double Eclipse Arches, we were wasted. That ended our plans to climb down to the arches like we did the first time we visited this area. However, it was obvious that the easiest way back to the Explorer would be to finish a loop and pass just above the arches on out way down the short side of the canyon cliffs. 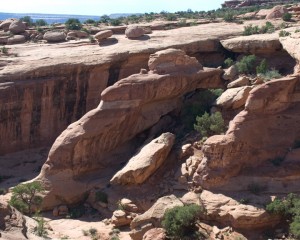 Because of the position of these arches, it just isn’t possible to get a good picture. Even when we climbed down to the arches years ago, I didn’t get a decent picture.

By then the afternoon was getting late so we didn’t have to wait long for the cool shadows to cover the next canyon to the south. We did a little more hiking to visit Elevator Arch, Stargate Arch and Gateway to Forever Bridge. 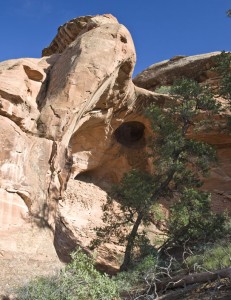 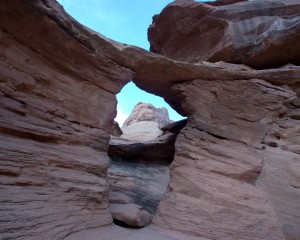 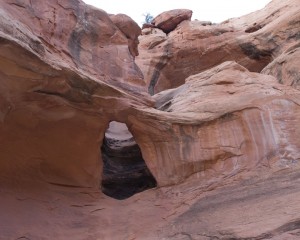 After a hot days in the hills, we REALLY enjoyed the Mountain Dew slushies that we could buy in Green River Utah. A large MD slushie was what got me home that night.