Friday afternoon after work, I loaded up the Explorer with my wife & oldest daughter, and headed east to Vernal, Utah. We stayed the night at my parents place which is also my childhood home.

The extended family was assembling at my parents place to help install a sprinkler system, something that had been needed for a long time. So Saturday found all available kids and grand-kids on the end of shovels and dragging pipe. It was hot work but we had a few clouds in the afternoon that helped keep it a little cooler.

A couple of my brothers had rented a trencher machine so most of the deep and heavy work was done. We just had to join the trenches and run the pipe.

However late in the afternoon, we found that the trencher had cut the power cable that ran to the sheds. We were trying to figure out how to best patch the wires when Dad was sent to look for some wire strippers. Soon he returned and announced “Sorry, no strippers”. I immediately heard my son behind me groan “Oh…” in disappointment. (No, not that kind of strippers!)

It took a while before we could get back to serious work again.

The next morning was Sunday and no work was going to be done that day. Fairly earlier that morning, I took off by myself so I could visit nearby Dinosaur National Monument in Jensen, Utah. I wanted to take some pictures at the Split Mountain raft ramp as well as some Indian petroglyphs just across the Green River bridge, in a side canyon to the east. 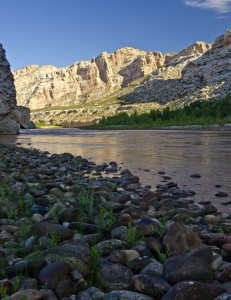 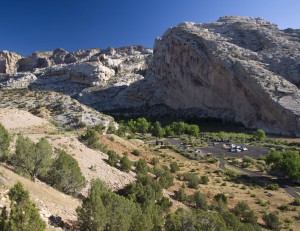 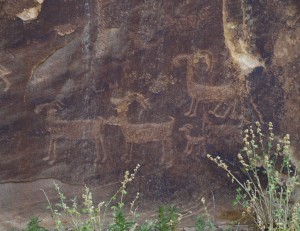 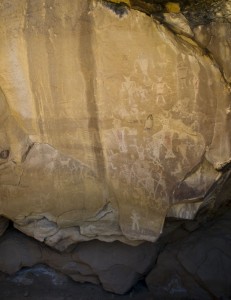 The second time that I ever visited these petroglyphs (many years ago when I was living in Vernal), a cougar screamed from the cliffs above me! THAT was a fearsome sound to hear echoing down the canyon. I immediately walked back to my vehicle parked nearby and didn’t stray far from it for the rest of the canyon trip.

After several hours enjoying the area, I had to hurry back to Vernal for church and a fantistic dinner organized by my wonderful mother. Then it was a three hour drive to get home that afternoon.