Paria Canyon and The Wave

The last week of May, my son Cory and I, jumped in my Ford Explorer Wednesday after work and drove down to Kanab Utah. We then spent the next couple of days exploring the southern edge of Utah and enjoying some warm weather.

The first stop on Thursday morning was the toadstool rock formations east of Kanab in an area north of the highway called the Rimrocks.

On the short hike up the shallow wash, we passed an older couple. Later we got a chance to speak to them again. They were from the Netherlands and vacation in the deserts of Utah regularly. What a nice couple! I was surprised how much of Utah that they had visited over the years. 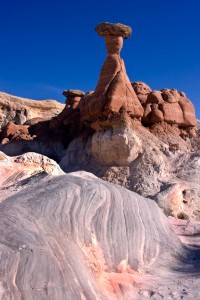 The next stop was at the old Paria (Pahrea) town site to the northwest of the toadstools. While remnants of old Paria have long since disappeared (except for a few rock foundations and a cemetery) it is sad to note that the movie set ghost town is also gone. After the residents of Kanab saved the old movie set buildings from flooding and rebuilt it further up the hill, sadly someone torched all the buildings leaving just cement foundation posts sticking out of the ground. 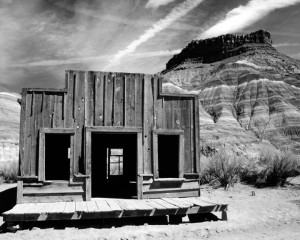 (Note: This is a trend that has been occurring for the last ten or so years all over the west, and especially in national parks. Someone is torching all man-made legacy relics such as rancher line shacks and cabins. Since this seems to be an effort to erase the hand of man in these areas, it would suggest that environmentalist have something to do with the effort.)

Cory and I drove down to the Paria River where the old road/trail follows the river north to Cannonville. I was surprised to see that vehicles were using it again after the severe flooding that took place several years previous. Cory and I decided to drive up the canyon to see how far vehicles could go. I especially wanted to see if we could see several natural arches that were somewhere in the Paria Canyon.

The Paria Canyon sports a year-round stream that requires driving across every few hundred feet. The stream does not contain fish and there is no streambed vegetation (because of the frequent severe flash flooding) so driving through the gravel and sand does no real damage. Any vehicle tracks will disappear the next time it rains in the upper drainage and the stream rises.

We soon passed a group of “seasoned citizens” on ATV’s. One older lady stopped to ask if we were lost. I assured her that we weren’t. She said that this was her 23rd trip up the Paria Canyon and began to gush over how beautiful the canyon was and how much she loved it there. Then she was off to join her other riders.

At Deer Creek, a stream joined from the west. This was a perfect place to find Indian petroglyphs so we stopped to scout around a like. Just around the corner from the confluence, we did find one petroglyph and what was probably the foundation of cliff homes against the cliffs. 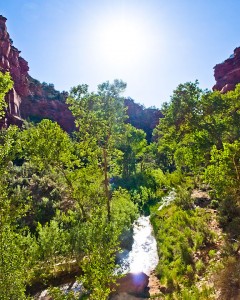 It was now late afternoon and the sunlight was filtering through the cottonwood trees and off of the stream. It was lovely and I would like to have explored that area more but we didn’t know how far we still needed to go.

Just around the corner, we found Backpacker Arch with Dunham Arch right behind it. 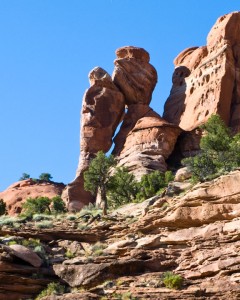 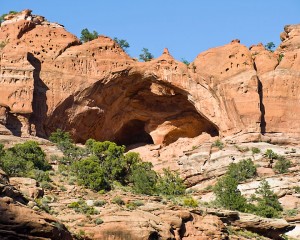 Another short distance up the canyon, we also found Paria Canyon Arch. Excellent! 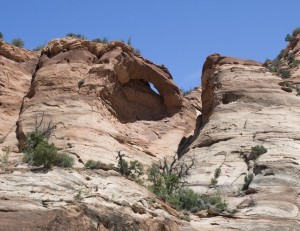 By now, I wanted to drive all the way through to Cannonville, if possible so we hurried northward as the daylight waned. The trail was rocky at times but no real problem.

We finally hit the split in the canyon with the Paria Canyon continuing north. We took the left fork up Bull Canyon which took us deep into the high cliffs. While we didn’t find anymore natural arches, I was moving as fast as possible, trying to beat the creeping darkness. I really didn’t want to try to navigate the canyon in the dark and we certainly didn’t want to turn around and go back now.

About sundown, we broke out of the canyon and hit the county road that took us towards Cannonville. (Taking the Paria Canyon fork would have been faster and easier.) Now we had a long drive south down the Cottonwood Road to get back to the Paria area. We then drove east to Page Arizona to get a motel room for the night.

The next morning we attended the BLM Coyote Buttes hiking permit drawing. We drew out the very first permit drawn allowing two hikers to hike to the Coyote Buttes area and see a The Wave the next day. (Though this area is just over the state line in Arizona, we still consider it to belonging to Utah. It MUST be Utah because there is a natural arch there.)

Since we had the rest of the day to explore, we drove back to Page Arizona and visited the Antelope Canyon slot canyon just east of town. Here the Navajo Nation was making a killing charging visitors $22 each to access the slot canyon. Cory and I had to raid our quarters to have enough for both of us. Because I was carrying a tripod (which cost extra) we were allowed to enter without being part of a Navajo guided group.

It wasn’t yet hot outside the slot canyon but it was definitely cool down in Antelope Canyon. I was glad to see that we were receiving some value for the money we were spending for access. Since I visited the canyon last, they had installed steel ramps and ladders in the worst parts of the canyon. The last time I was there, there was a single extension ladder to get down a drop off.

I really enjoyed the next couple of hours as I took pictures of the amazing sandstone lines and colors. Then on the way back out, the light had changed so I had new pictures to take.

At one tricky climb in the canyon, Cory fell and twisted his ankle. He could still walk on it but by the end of the day, it was sore and stiff. That ended Cory’s hike to Coyote Bluffs planned for the next morning.

By the time we left Antelope Canyon, we were really tired. We stopped off at the Colorado River overlook for Glen Canyon Dam but didn’t feel like doing much else. Instead of finding something else to do for later that day, we got a room in Page Arizona again and spent the rest of the day resting, napping and enjoying the air conditioner.

The next morning, we were well rested again but Cory’s ankle was still going to keep him from doing the Coyote Buttes hike. As it turned out, it was just as well he didn’t try it.

The usual hike to Coyote Buttes is a 3.5 mile hike from Wire Pass. While there is some elevation change, the hardest part is hiking the sand hills. However, I indicated on the permit that I would be hiking the Notch Pass trail which appeared to be a mile shorter. I figured that it would be rougher but it was worth not hiking that extra two miles.

Cory drove me down the House Rock Road and past the Wire Pass trailhead for about 2.3 miles to a small parking area that we guessed was the Notch Pass trailhead. I began hiking east up a short hill, across a sagebrush flat and then up the obvious pass. I hadn’t climbed up the pass very far when the trail disappeared completely. It took quite a while climbing around in the rocks to pick a way to the top. Several times I had to back track and try another direction. This was NOT saving me time or distance.

By the time I got to the top of Notch Pass, I was wishing I had taken the Wire Pass trail. I was REALLY glad that Cory hadn’t followed me on this hike!

While taking pictures from the pass, a helicopter swooped low over the pass and down towards Coyote Buttes. That was a bit unnerving.

I then found that getting down from the pass was not going to be easy. I believe the trail was suppose to head north and then descend to the buttes below. However, I attempted to go straight down which put me at the top of several cliffs. I ended up hiking south and descending a sand hill to get to the buttes.

At this point, I knew I was NOT going to go back the way I had come. I was going to take the much easier Wire Pass trail out of there!

However, this did put me into an area of the buttes that most people never visit. I really enjoyed taking pictures of the rock formation in that southwest corner of Coyote Buttes. The only wish I had was that there had been a few picturesque clouds in the sky. As it was, it was a perfect blue sky day… and getting hot.

I ended up climbing out of the main gulch and traveling overland to get to The Wave. That caused some surprise when I walked up on a some tourists hiding from the sun under a cliff. No one expected anyone to come from the area I appeared from. I joined the hikers for a much needed rest in the shade before heading around the corner to have my turn with my camera at The Wave.

The Wave is a great example of how wonderful and whimsical nature can sometimes be.  This is one of those places on earth that has to be experienced to be believed. This is truly a photographers paradise! (Unless you are a frustrated amateur photographer like myself who can never seem to capture by camera the true essence of an area.)

After enjoying the area as long as I dared, I headed down the Wire Pass trail which required sloughing up and down sand hills and 3.5 miles of trail. I finally arrived at the trailhead but my ride (Cory) was now 2.3 miles south at the Notch Pass trailhead, waiting for me. I waited around for almost a hour before I could bum a right southward because all of the traffic was headed northward. My ride turned out to be a family who owned the Pita Factory store in Provo. I caught up with Cory as he was about to drive down to the Wire Pass trailhead to check for me after deciding that I wasn’t going to show up at the Notch Pass trailhead.

We then headed for home back in Orem Utah.

What a great trip and a great opportunity to spend some uninterrupted time with my son!