Spring Along the Green River

Spring has finally arrived in Utah so David and I drive down to the area south of Green River Utah for a day of exploring. My 23 year old daughter Shantisha wanted to go along so we made room in the back seat for her.

(My children and/or wife usually want to go out with me at least once every Spring. But ONCE is usually all they ever want to go each year. After one trip, they remember why they don’t go more often.)

We drove south from Green River Utah so we could drive down the west side of the Green River to an area of small slickrock plateaus just south of the Price River but north of Horseshoe Canyon in Canyonlands National Park. The most interesting areas down there were the deep canyons (like Three Canyon) that cut through the terrain before dumping into the Green River gorge. 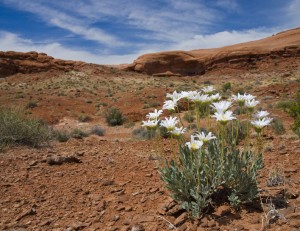 We mostly just drove around the jeep trails, scaring Tisha as the Explorer tipped and bounced at the edge of cliffs. I did see an interesting “toadstool” rock formation in the distance that I would like to hike to sometime.

We did locate one small class D arch just north of Trin Alcove at the mouth of Three Canyon. Maybe I will call it Tisha Arch. 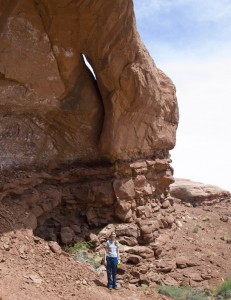 On the way back, we stopped by a small carbonite geyser on the north side of the Price River. It really wasn’t that picturesque but I’ll bet it’s more interesting when it goes off. 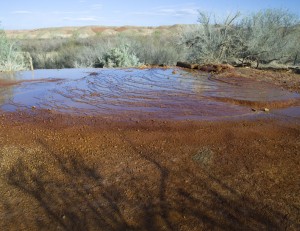