It was Saturday again and it promised to be hot everywhere in Utah again. In an effort to avoid the heat problems that we experienced the previous week, David and I decided to look for higher and cooler country in southern Utah to explore. Saturday morning we hooked up the trailer with the ATVs and headed for the east side of Boulder Mountain between Torrey and Boulder Utah.

It was humid and threatening rain when we left the Provo/Orem area in Utah valley. When we arrived in Torrey Utah, we found a large dark cloud hovering above Boulder Mountain to the south. However, the east side looked only partially cloudy and that is where we were heading. 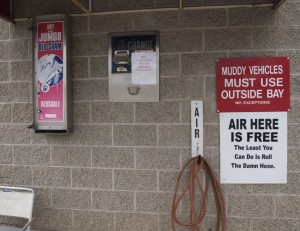 We unloaded the ATVs just off the Torrey to Boulder highway at the Pleasant Creek/Bown’s Reservoir road. We then took the Rosebud ATV Trail east down the mountain to Bown’s Reservoir. The Rosebud Trail reminded us why they called the area Boulder Mountain. It was VERY rocky. 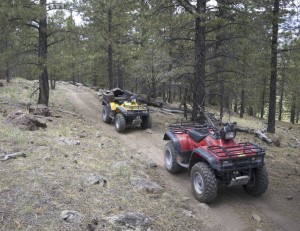 While the Rosebud ATV Trail seemed to end at the reservoir, we explored surrounding trails and old jeep trails to see what else we could find. 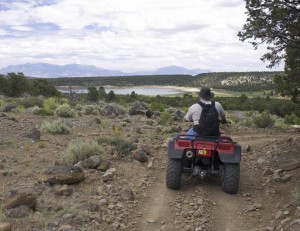 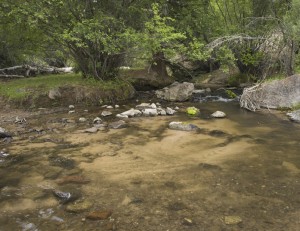 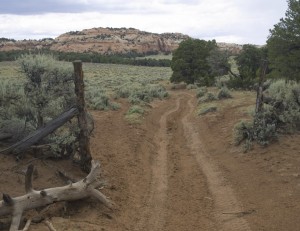 We drove the jeep trails to the end of each trail. One of the trails took us to a nice view into Spring Gulch.

We also hiked up to a deep alcove on the west side of Pleasant Creek Flats. We found a few petroglyphs on the cliff walls but not much else. 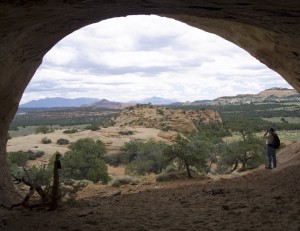 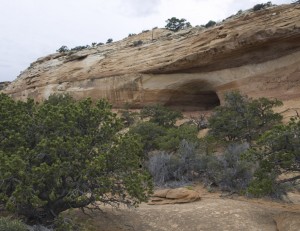 Back on the main road through Jorgenson Flats, we headed northeast to Tantalus Flats where we took a side trail northwest up Sulphur Creek. 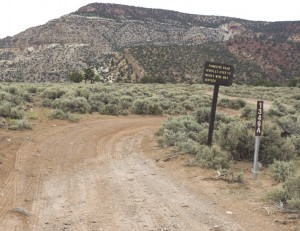 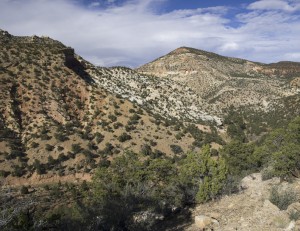 Before taking the trail up Sulphur Creek, we stopped to explore the rocks around the area where Pleasant Creek, Tantalus Creek, Spring Gulch Creek all join before joining Sulphur Creek. Here the water had sculptured its way through the sandstone leaving wonderful waterfalls and pools. Delightful! 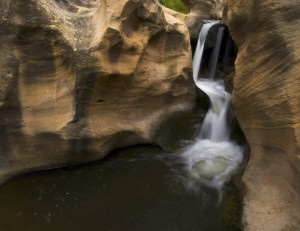 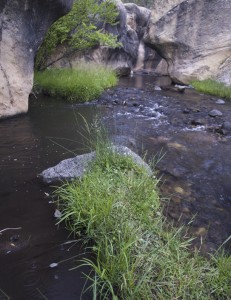 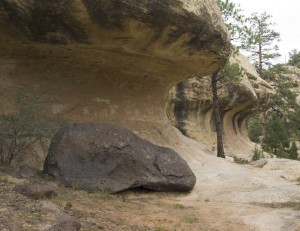 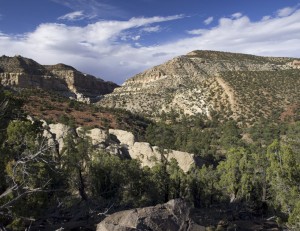 As we traveled northwest up Sulfur Creek, the clouds became more threatening and finally decided to rain for a bit on us. We finally had to duck under a large Pondersa Pine to get out of the rain. The rain only lasted a few minutes so it wasn’t long before we were back on the trail again.

About 3.4 miles up Sulfur Creek, the trail ended at an old caved in log cabin. The cabin door had the name R. Allen carved in it along with the date 1949. This log cabin was unusually large compared to other log cabins we have run across. There was a nearby root cellar, a running spring and there were chicken pens built on the side of the cabin. This obviously wasn’t just a cattle line cabin. This looked like a homestead. Looking further up the canyon to the northwest, it looked like there were large areas of green meadows that would have been perfect for stock grazing. On the way in, we also noticed that there were power lines which would indicate that they even had electricity at one point. 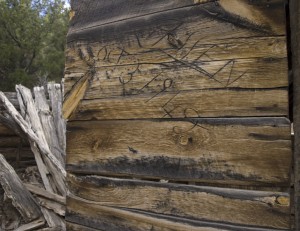 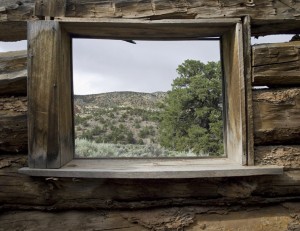 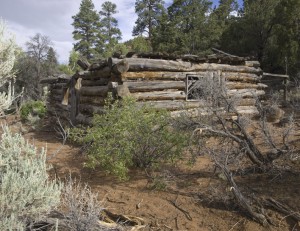 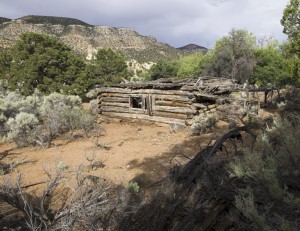 We headed back down the canyon and back up the Jorgenson Flats road until we were back on the Rosebud Trail. However, instead of heading back to the vehicle, we decided to check out the Slickrock Trail that had intersected the Rosebud Trail at one point.

When the Slickrock Trail intersected the Rosebud Trail, the Slickrock Trail to the north was signed indicating that only mountain bikes, dirt bikes and horses were allowed. However, the Slickrock Trail heading south was an ATV trail. We took the trail until it crossed the main Bown’s Reservoir gravel road and then south down into Oak Creek. Here we passed on the east side of some impressive white sandstone cliffs. The trail then turned east down Oak Creek. 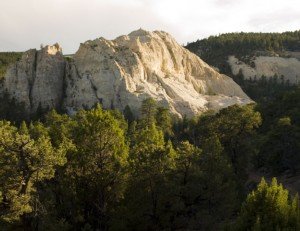 We really wanted to take this trail to the end to see how far down Oak Creek we could ride. Some place down Oak Creek is a natural arch called Valentine Arch and we would like to visit it some time. However the day was almost over so we only made it to Aspen Point. We will have to return to see the end of this trail. Besides, on the way down the Oak Creek trail, we found several other ATV trails that we need to explore. We will be back. 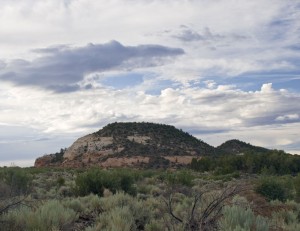 By the time we arrived back at the vehicle, it was late and we found that we had only driven 34 miles. That wasn’t too bad considering how rocky all the trails were.