It was finally Saturday again and time for me to get out of town for the day and mentally/emotionally/spiritually decompress. This time David and I loaded up the ATV’s and headed to an area between Moab and Green River Utah.

The main problem that we would be facing would be the summer heat. It was projected that it would be about 103 degrees in the area with no clouds. We needed to try it anyway, just to see if you could keep reasonably cool by keeping moving on ATV’s. We were also hoping that it would be a little cooler in the canyon or that a breeze would come up. David verbally “dared” it to rain on us.

We were actually heading for Tenmile Canyon but I also wanted to check out the nearby area called the White Wash Sand Dunes. This was an area we had seen from a distance, probably one Easter weekend since it was packed with RV’s around some sand dunes.

We exited the I-70 freeway at a Ranch exit, several miles before the regular Moab exit, and headed south on a gravel road. Not too far from the Ruby Ranch on the Green River, we split off to the south for White Wash and the sand dunes. However, because of severe road damage from storms, the dirt road off the hills and into the wash is almost impassable, even for ATV’s. We end up parking in a large cleared staging area near an oil rig and driving the ATV’s off the hill. It took a while to find a drivable path down to the wash.

We first checked out the sand dunes on the south side of dry and flat White Wash. (It is obvious that there is a lot of ATV fun to be had when the wash is wet too.) Driving in the dunes was a blast! We hadn’t tried out the ATV’s in sand dunes before and we soon discovered that is was great fun. However, I also discovered a new issue with sand dunes… there are cliffs in the sand. I almost roared off a ten foot shear drop off that appeared magically in front of me. I had no idea that sand could create cliffs like that. David and I learned to be careful about roaring over the top of anything we couldn’t see the other side of. 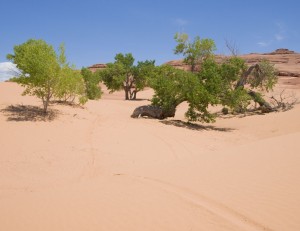 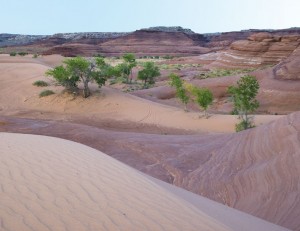 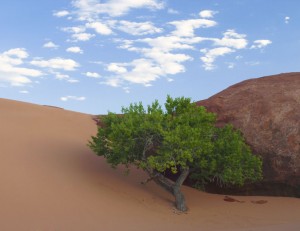 Another interesting thing about the sand dunes was the cottonwood trees growing up in them. Since the sand dunes are at the base of sandstone hills, rain runs off the sandstone and beneath the sand. The trees are anchored in the sand but tapping the underground movement of the water as it slowly flows downhill. It was a very strange site to see these green trees sticking up through the sand.

After playing around in the sand for a while, we decided we had better head for our real destination, Tenmile Canyon. This required a drive down dirt roads for about 14 miles to access the top of Tenmile Canyon. At 20 miles per hour, that ride took the best part of an hour.

Once inside the canyon, there was a little shade now and then under occasional cottonwood trees but it was still REALLY hot!

We didn’t go far before we decided to check our exact position. We wanted to hike a short distance up one of the side canyons to visit North and South Black Eye Arches. When we checked our position, we found that we had actually passed the side canyon. We had to turn around and go back about a quarter of a mile. From there, were could actually see South Black Eye Arch about 1/3 of a mile away. Surely we could quickly hike that far without problems.

HA! That short hike about killed us!

Full direct sun in the middle of a July summer day with NO breeze. Hiking is stupid! What were we thinking!? 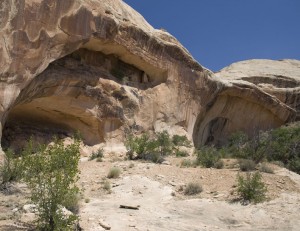 As soon as I was able to stumble to South Black Eye arch, I immediately climbed up into the alcove to get out of the sun. It was still too hot. I quickly took a few pictures and headed back looking for shade. David joined me a few minutes later under a cedar tree. We had plenty of liquids but it was still making us ill. After recovering for a while, we finished the hike back to the ATV’s and swore to NOT do any hiking for the rest of the day unless the temperature magically dropped 20 degrees.

And then we noticed clouds forming on the horizon and heading our way.

A few miles further down the canyon, we found a cliff handle arch that we had never heard of before. That was interesting.

Later we found a side road that seemed to exit the canyon to the north. We decided that this road was how we were going to leave the canyon since it might take us to another couple of natural arches on Tenmile Point. 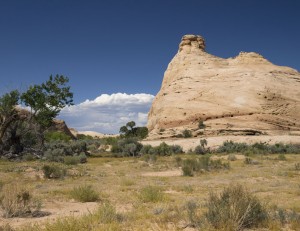 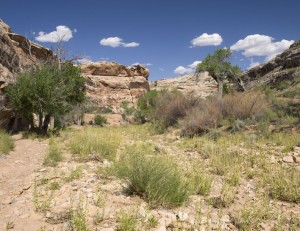 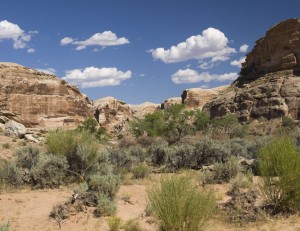 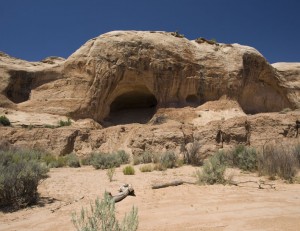 It was still quite a distance to the end of Tenmile Canyon where it hit the Green River. We decided to head back anyway. On the way back we stopped to lay on a flat rock positioned above a pool to rest in the shade. We watched toad tadpoles and fairy shrimp in the water and swallows snatching bugs off the water surface. It was almost bearable in the shade… if you were not moving.

We did take the early canyon exit road which did finally deposit us on top, north of the canyon. That also allowed us to visit several small class D arches that I called Kilroy Eyes Arches. This exit also gave us a good overview of Tenmile Canyon. 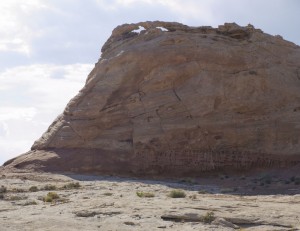 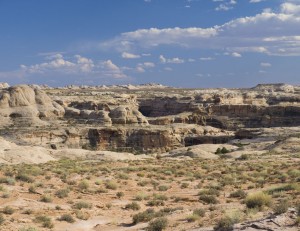 It took quite a while of exploring old jeep trails before we hit the main Tenmile Point road. Then it was a few additional miles to the west to a rock outcrop between Tenmile Canyon and the road. Parking on one side of the rock outcrop, we were able to walk around the end (no, this was not “hiking”) to the alcove that contained Tenmile Point double arches. 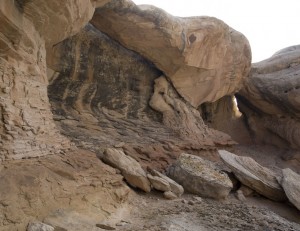 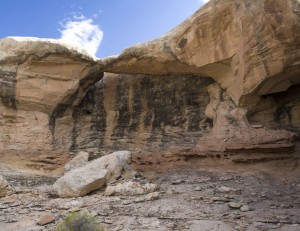 By now, we were enjoying occasional shade from passing clouds that were threatening to rain nearby. It actually tried to rain on us but the rain never hit the ground. It was just too hot.

After a few pictures, we were back on the ATV’s and heading back to White Wash and the sand dunes. By then we were well baked and dehydrated. It didn’t seem to matter how much water or PowerAid we drank, we were always parched.

On the way, I stopped long enough to look into the canyon part of Red Wash. I noticed that there were ATV tracks in the bottom. I wonder how they got in there? Hmmm…. 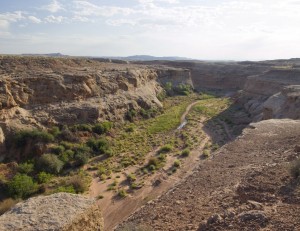 By the time we got back to the White Wash, the sun was low on the horizon and casting long shadows. We headed for the sand dunes to take some more pictures and play some more. Then the sun disappeared behind storm clouds and the pictures didn’t seem as interesting. 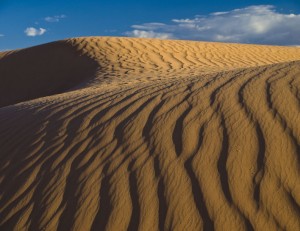 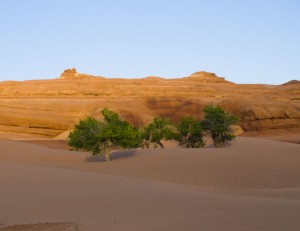 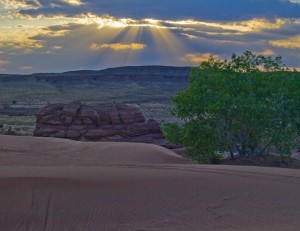 We did explore White Wash a little to the north and found an area of interesting rock formations. However, we were tired and still feeling a little ill so we picked our way up the hill again to our vehicle and trailer. We then headed down the road towards Green River Utah and a promise of cold drinks.

We put 48 miles on the ATV’s and broiled our brains. It was after 1 AM before I arrived home that night. Needless to say, I slept in the next morning.