The Dike and Horizon Arch

I felt like we had explored a good deal of the western side of the San Rafael Swell, especially since our last few weekend trips have been to these areas. However, there was one area between Link Flats and Seger Hole that I wanted to see. Looking at topographic maps and Google Earth, I found a jeep trail into the area called The Dike. Saturday morning, I picked up David and headed out there.

From Emery Utah, we drove the Emery cutoff down Miller Canyon so we could get a look at the Coal Cliffs in daylight hours. 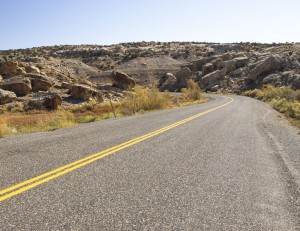 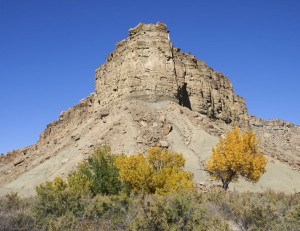 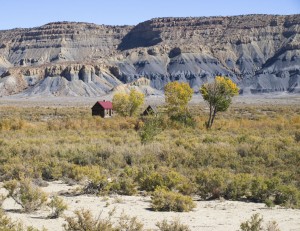 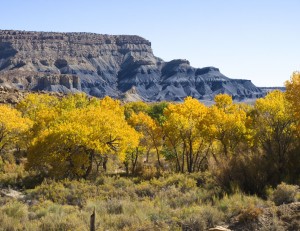 Once we hit the I-70 freeway heading west, we pulled off at the Ranch Exit just one exit past the rest stop that we had stopped at last week. We parked the Explorer a short distance down the dirt road and headed south on the ATV’s.

The tires on the ATV’s had been getting a pretty good beating this summer. We had already replaced the front tires on both bikes and we finally had to replace the back tires just this month since they were getting way too slick to be reliable in the kind of country we traveled in. We had already had our share of tire problems the past three trips with a flat tire on an ATV, one on the trailer and then one on the Explorer last week. It was nice to be running on new reliable tires.

New tires didn’t help in the dusty road we were on though. It was kind of like driving in light grey powered sugar. I had to give David a half mile head start just to stay out of his dust cloud.

Several miles down the road we turned east for a mile and a half where we could then take the jeep trail heading south. However, several miles down this trail, we took the wrong fork which took us east along the north lip of Cat Canyon. 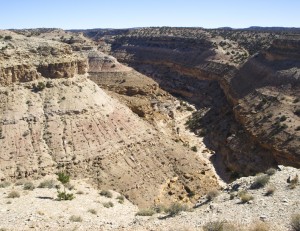 We turned around when we hit the main Emery County road that dropped down into Cat Canyon. This is where we turned around last week when we were heading in the opposite direction.

Once back to the fork in the trail, we took the other trail which soon crossed the low end of Cat Canyon, crossed Dizzy Trail Canyon and headed out through the cedar hills to the south. David was quite a distance in front of me so after a while I really got into a driving “groove” — an extremely focused and fast riding mode that can REALLY be fun on the right trails. 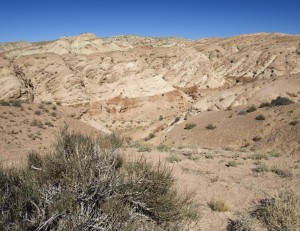 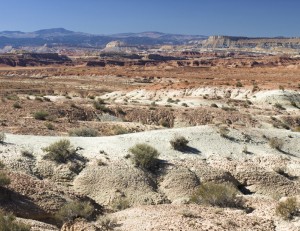 Many miles later, the trail headed up a wash and soon bumped out in some sagebrush flats. Ahead were the top rim cliffs overlooking Reds Canyon and Poor Canyon and the end of the trail next to a tall rock outcrop with a class “c” natural arch hole in it.

Wait a minute, this looks familiar.

That is Horizon Arch and we have been here before!

After parking my ATV and hiking around to the east side of Horizon Arch, I caught up with David and we tried to figure out how we got here before. Neither of us remembered driving in on that jeep trail and that is the only way to get there. It was probably 10 years or so ago that we first visited this arch. 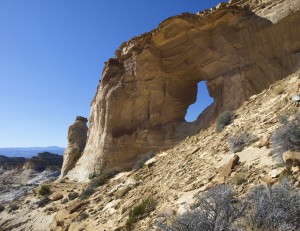 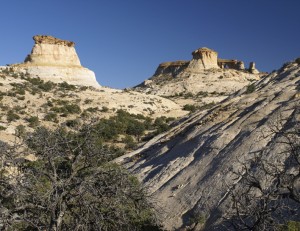 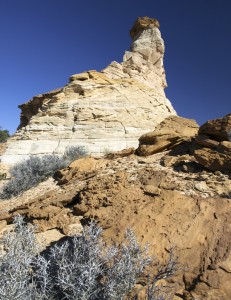 We took some “fresh” pictures and I checked out some cowboy signatures on the cliffs near the arch. One of the signature was for Allen and was dated 1935. Another was dated 2007. Hmm…

We also took a few pictures of Poor Canyon and were glad that we couldn’t see any natural arches down there. It would be a real struggle to climb into that canyon. 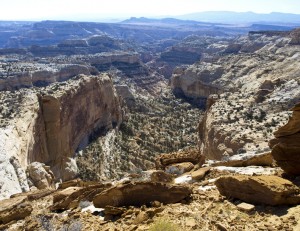 We checked out some side roads in the area but they didn’t take us anywhere interesting. 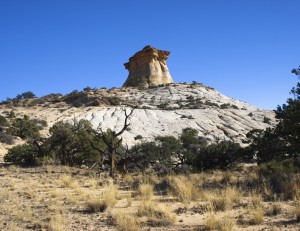 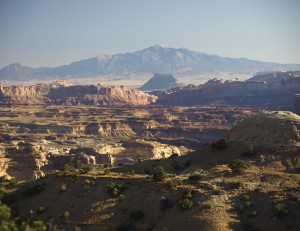 Soon we had to head back as the afternoon sun quickly dove towards the horizon. 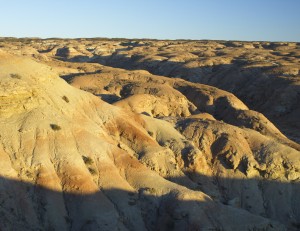 About the time I crossed Cat Canyon, I noticed David wasn’t behind me so I stopped and waited. When he didn’t show up, I turned around and headed back. I soon found him slowly driving down the trail with a nearly flat rear tire. (One of the new ones!)

Many places on the trail was through a lot of shale, which could be sharp if it was hit just right. I shouldn’t have been surprised that we got a flat tire out there. But they were NEW tires!

We stopped and tried to get the air compressor to work so we could patch the hole. The air compressor had apparently taken too many bumps. It wasn’t going to pump anymore. David ended up limping the rest of the way back to the Explorer on a partially inflated back tire.

It was dark by the time we got back to Emery Utah and we stopped in Castledale (again) to use the air compressor to confirm that we had a hole in the ATV tire. Oh well.