Saturday morning found brother David and I heading for the southeast side of the San Rafael Swell in my Ford Explorer. We parked just a few miles north of Goblin Valley State Park and began hiking to the southwest, up the white sandstone layer that defines the edge of the Swell. 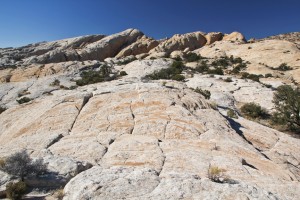 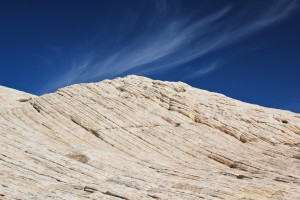 We were looking for a class ‘C’ natural arch that another hiker had told us about. He called it Squint Arch. We had never heard of this arch and wanted to visit it. With just a little searching, we located the arch within sight of the Goblin Valley State Park access road. Because the arch faces almost south, the view from the road would not look like a natural arch. 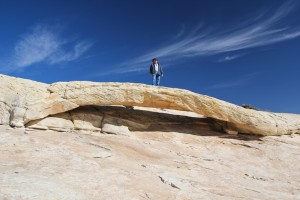 We obviously had driven by this arch for years and did not know it was there.

We then had the rest of the day to just explore this area. We headed almost south far enough to jump several small ravines so we could then climb up the steep rock to the west. Along the way, we found a class ‘D’ arch that we could add to our arch list. We called it Ogle Arch. 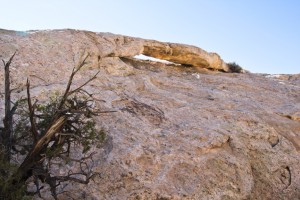 The climb to the rim of the white sandstone to the west was a bit of a gut buster but it wasn’t hard picking a safe route as long as you avoided the drainage crevices that were worn into the sandstone face. At the top, we had a nice view into Wild Horse Creek (or Wash) directly below us. This is where the wash cuts half way through the San Rafael Swell edge and then drains to the northeast between the rock layers for about 1.3 miles before finishing the cut and exiting the swell edge heading southeast.

We climbed around in the rocks near the top to make sure nothing interesting was hidden in the area. We then headed back down again and returned to the vehicle.

We were tired but still had some daylight. Back on the state park road we drove north until we crossed the Temple Mountain road and then continued north on dirt roads until we could take the North Temple Wash road heading west. Here we visited several small class ‘D’ natural arches and a Indian pictograph panel. 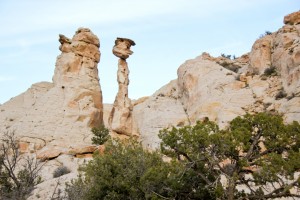 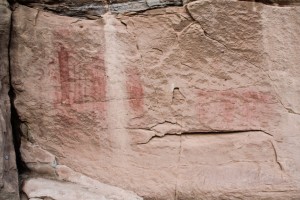 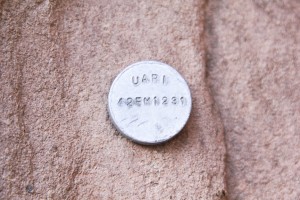 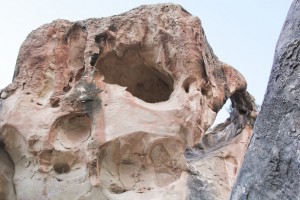 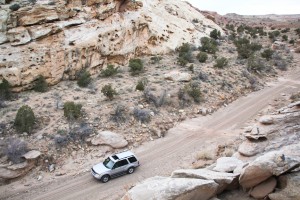 By then it was late enough to head for home again.