Here in Utah, the weather at this time of year fluctuates between pleasant and warm fall days to extreme winter days. Since the temperatures in the San Rafael Swell area were going to be in the high 60’s or low 70’s, it sounded like a good chance to squeeze in yet one more Saturday trip to explore more Utah canyons. Besides, another winter storm was forecast for Monday.

Since we still had a flat tire on one of the ATVs, David and I decided to drive down to the Temple Mountain area in the San Rafael Swell to hike Farnsworth Canyon, just north of North Temple Wash. And what a beautiful day for exploring the canyons!

We had visited the top end of Farnsworth Canyon over ten years earlier when there was still a jeep trail into the drill site located at the top of the canyon. At that time we had hiked up the side canyon to visit San Rafael Bridge, Hidden Bridge and Jug Handle Arch. However, we wanted to hike the canyon from the bottom and then again visit the side canyon that contained these natural arches.

We parked near the end of the canyon where Farnsworth Canyon sliced through the edge of the San Rafael Swell and becomes a wash. 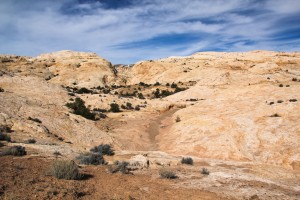 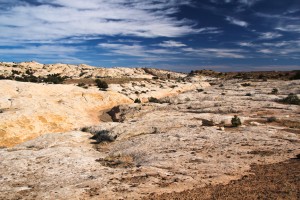 The hike was a pleasant walk up the dry creek bed. Shortly after entering the steep sandstone walls of the canyon proper, we noticed a class ‘D’ natural arch hanging in a crack on the north side of the canyon which we referred to it as Farnsworth Canyon Arch. 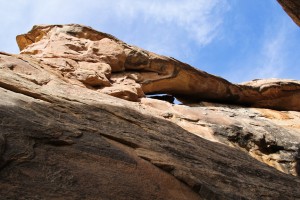 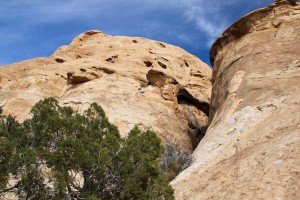 The dry creek bed cut through the first levels of the San Rafael Swell edge and then opened up into a wide pocket. This is the “Between the Reef” area. 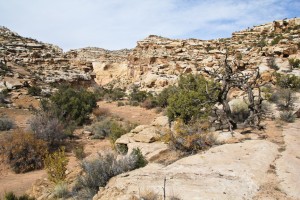 Soon we were hiking through a quarter mile or so of slot canyon before the canyon opened up again to a wide but fairly deep sandstone canyon. There were a few minor choke stone boulders in the slot canyon area but they were fairly easily to climb up. 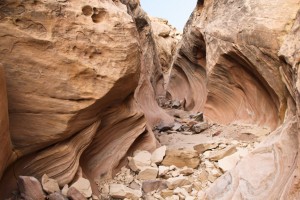 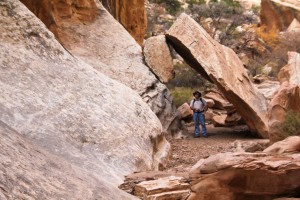 About a mile up the canyon, where the canyon opened up from the slot canyon area, there was a short side canyon to the north that looked interesting. 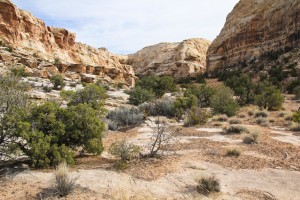 At about the 1.8 mile point, we found the collapsed remains of a cabin or shed. This was not far from the abandoned oil drill hole. 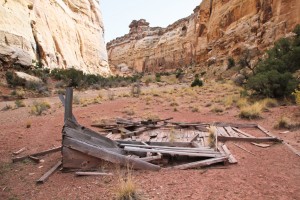 Here we noticed that the cedar and juniper trees had been beat up, with the new growth ends of branches ripped off and scattered on the ground. We also noticed that the soft ground areas were pock marked. It appears that this area recently experienced a violent hailstorm with hailstones at least the size of marbles. I’m glad we missed that event. 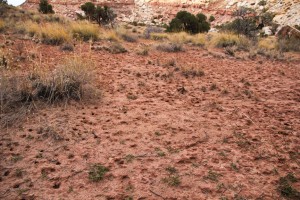 From here, we turned to the north and began hiking and/or climbing up the side canyon that we knew hid three major natural arches and bridges. The side canyon was still badly clogged with bus sized choke stones. Climbing through this area was exhausting, which I remember also being the case the last time we were here.

When the canyon floor began to level out a bit, we could see the San Rafael Bridge high in the cliffs above us. A short climb up the side of the hill was necessary to get a good view of the class ‘B’ natural bridge. 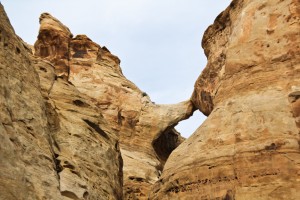 By following the hill along the west wall, we could enter another side canyon area that would let us climb up to a level where we could see a class ‘C’ arch called Jug Handle Arch, just above us. 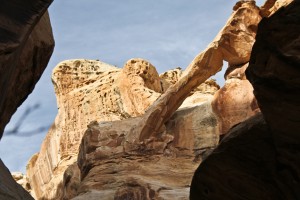 Climbing up this narrow area required some steps building which allowed us to climb up the dry falls. 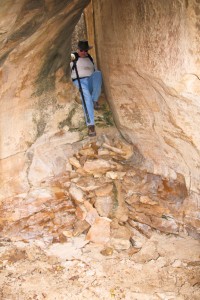 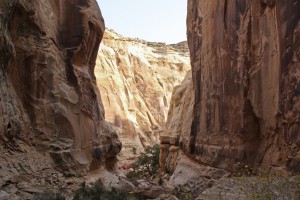 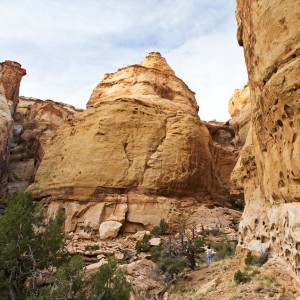 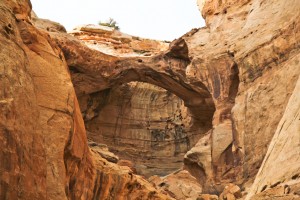 When we started the descent out of the canyon, we found some relief by staying on the east hillside. This also allowed us to get a better view of Hidden Bridge though from a greater distance.

It was good to get back on nearly level ground again once we reached the main canyon. Near the abandoned drill hole, I notice drill samples spilled on the ground. 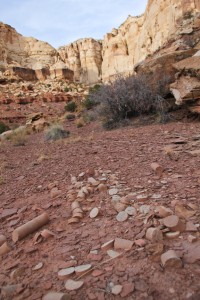 We then headed back down the canyon and back the vehicle.

When we arrived at the beginning of the slot canyon area, we took some time to explore the other side canyon that we had noticed on the way up the canyon. It had some interesting rock formations but the only thing we found was some modern hiker signatures scratched on a wall. 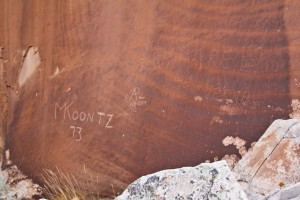 On the way up this side canyon, I spooked an owl that attempted to escape further up the short canyon only to turn around and fly directly over my head as it left the canyon. It is amazing how silent those great wings can be. I couldn’t hear even air movement as it swooped overhead.

Back at the vehicle, we enjoyed a rather colorful sunset before heading for home. 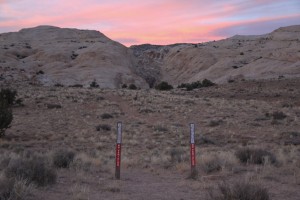 A perfect end to a beautiful day! 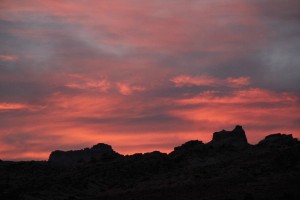