The weather forecast for Saturday had a storm moving in late in the day, mostly affecting the Wasatch Front and northern Utah. (We had awaken to several inches of snow just a few days ago but it had turned warm again.) I talked David into taking a chance on good weather in the San Rafael Swell. We pulled the ATVs on the trailer to Moore Utah and found beautiful blue skies with only a few clouds in the distance.

From Moore Utah, we took the newly paved “Moore Cutoff” road which heads east until it intersects with the I-70 freeway on the west side of the San Rafael Swell. After taking a few panorama pictures from the rim of Eagle and Fab Canyon, we backtracked to a dirt road heading north along the west rim of Eagle Canyon.

To the west we could see storm clouds rolling over the distant mountains. We road the ATVs northward but kept an eye on the clouds.

The jeep trail that we were exploring was a good dirt road until it tries to cross Eagle Canyon after the canyon has become a deep wash. At that point, the maps seems to indicate that the road either ends or continues as a faint trail a distance up the wash before it climbs the hills to join a dirt road again. 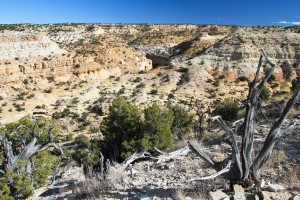 Just before we hit Eagle Canyon, David had a flat rear tire. We tried to pump it up so we could find and patch the hole. When we finally found the leak, it turned out to be a three inch tear. We plugged the tear with a number of plugs which allowed the tire to hold at least a couple of pounds of air pressure. That would get us by since it was obvious that the day was going to get cut short by the approaching storm anyway.

At the Eagle Canyon crossing, Carsonite trail signs warned that the trail was about to get “Difficult”. We walked down the hill into Eagle Canyon (Wash?) and found the last drop off to be the worse. Looking back up the hill, we recognized the hill as being the site of an ATV rollover documented on YouTube.

Suddenly, the top of the hill looked steeper than we wanted to try. 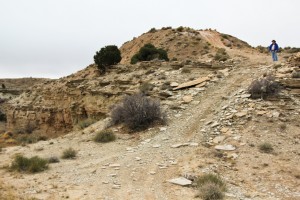 We decided to walk up the wash to see how the trail was and if it was possible to exit the wash. It looked like there had been several flash floods through there recently and there were major rocks lining the “trail”. 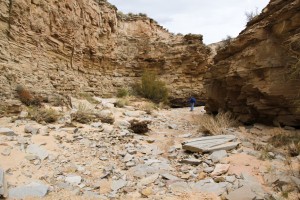 Just around the corner, I exited the wash to examine a shallow alcove that seemed right for shelter for ancient hunters. On the walls, we could make out very faint pictographs and I found a piece of pottery shard (which I, of course, left for someone else to discover). That seemed an odd place for anything but a temporary hunter’s shelter so I was surprised to see pottery of any kind. 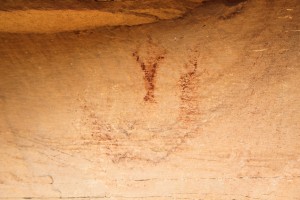 About .7 mile up the wash we found were the trail exited the wash but we could only see one motocross track that indicated anyone had attempted the ride in recent months. 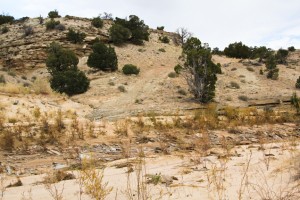 We headed back to the ATVs and immediately elected to head back to the vehicle. The storm was moving in quickly. Soon we were being treated to light freezing rain driven by thirty mile per hour wind. Fleeing into the wind at about twenty miles per hour meant that we could use the phrase “stinging rain” accurately. OUCH!

We also discovered that we could drive fairly well just using one hand while the other hand attempted to keep the rain from pinging our noses and lips.

By the time we had arrived back at the vehicle, loaded up the ATVs and climbed into my Ford Explorer, we were soaked and frozen… on just our front sides. A few miles down the road, the rain opened up on the heavy side. The drive over Soldier Summit was in the snow but it was still warm enough not to freeze to the roads. By the time we hit Utah Valley, there was only light rain.

Oh well. We did get a few hours exploring Utah.

However, something tells me that my carefree summer is about over.