Winter arrived in northern Utah before Thanksgiving leaving 8 inches of snow on the ground and even more the further north you looked. By the first week of December, Fall like weather had returned and most of the snow had melted. What I desired was to see the sun.

By Saturday December 4th, my brother and I decided that we would see the sun if we drove south at least as far as Moab Utah. We were wrong but that didn’t stop us from spending the day in Arches National Park pretending it was warm and sunny.

We first stopped at the visitor’s center for a few pictures. 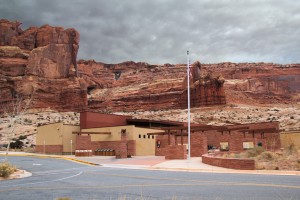 This also gave us a chance to stop long enough to take pictures of a few obscure and small road side natural arches. 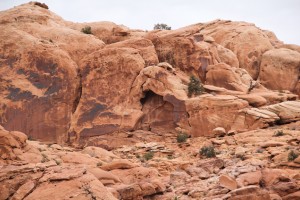 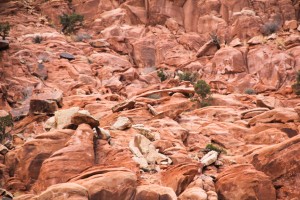 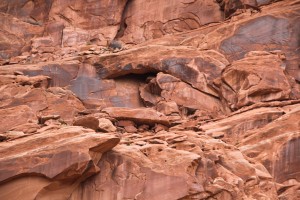 We were surprised how many hikers were there, probably trying to do the same thing. We met a group of them at Courthouse Wash who said something about being part of the local Sierra Club. They just returned from upper Courthouse and quickly emptied out the crowded parking area when they left.

We took a short hike northwest up Courthouse Wash from where the park road crosses the wash. Along the way we ran into remnants of the previous hiking group that had been exploring side canyons.

We took the first side canyon on the north side which allowed us to visit Running Coyote Arch  a small class ‘D’ arch. 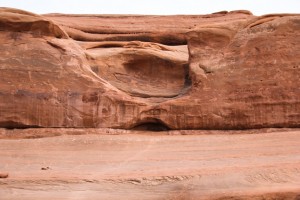 Further up the canyon, we also visited The Tunnel, a class ‘C’ tunnel arch that is not that large but about forty feet long. 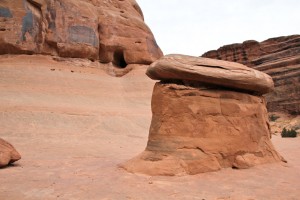 On the way back, we were surprised by a yodeling hiker and his female companion, high up the cliffs on a precarious rock. We stopped long enough to make sure that they were not in trouble up there before continuing our hike. They probably belonged to the Toyota FJ Cruiser from California that we were parked next to since it was the only vehicle left when we pulled out.

The entire hike was under a dreary “Winter Sky” which really didn’t help the few photographs that I took. 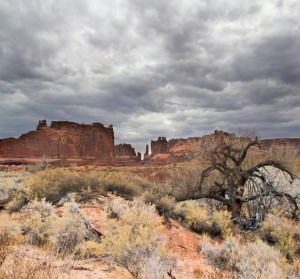 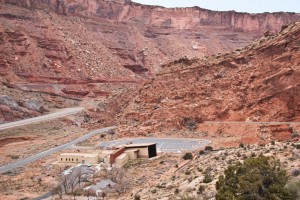 We never did see the sun. Still, it was good to just be out again.

Any day hiking in Utah is better than any day sitting in front of my work computer.