Behind the Reef Trail

The weatherman was calling for a chance of showers which meant that Saturday might be a little cooler than normal. That was all the excuse I needed to load up the ATVs, pickup my brother, David and head south Saturday morning. However, our trip was delayed an hour in Spanish Fork Canyon for a bad traffic accident. A older trio from Texas had a head-on with a eighteen wheeler carrying bricks near the highway 6 and Thistle turn off. The accident closed all five lanes of traffic and resulted in the deaths of two men from Texas. Very sad and grim.

While waiting for the road to be cleared, we got to speak to a lady from Bluff Utah who was heading back to her home. Her husband guides impromptu ATV trips in that area.

Once we were back on the road again, we headed south almost all the way to Goblin Valley State Park and parked the Explorer at the Temple Mountain trail head. 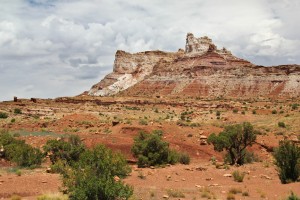 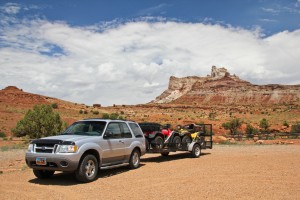 Instead of heading north on the ATVs, past the miner cabins like we did in March 2009, we headed south on the Behind the Reef trail. The trail was damp in places because of previous rains and we kept a eye on several black clouds in the distance that threatened rain for later in the afternoon. Along the way we saw a lot of evidence of recent heavy rains with fresh washouts in the gullies and the damage from flash flooding.

But the weather was indeed cooler than normal.

The first stop was in Wild Horse Canyon. 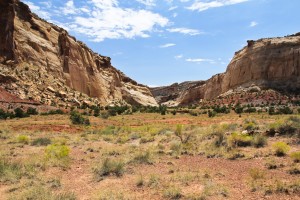 We parked at the end of the jeep trail and hiked down the canyon a short distance so we could take pictures of Wild Horse Arch, a class “C” natural arch (sometimes referred to as a “natural bridge” though it isn’t). 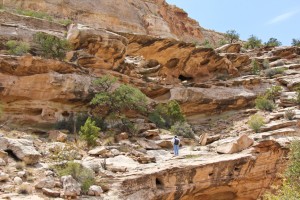 Because there was a smaller class “D” arch next to it, I guess you could even call it a double arch. In fact, just below and to the west was another class “D” arch which almost makes it a triple arch! 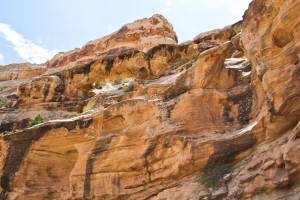 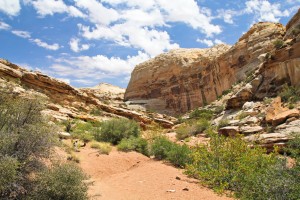 On the way back to the ATVs, we also took pictures of another class “D” arch called Play Arch, which is really more of a large hole in a boulder. 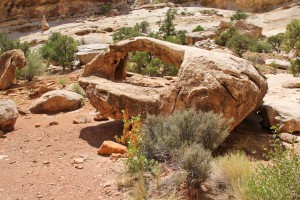 Next to Play Arch are the remains of Mr. PacMan, if anyone should ever ask what happened to him. 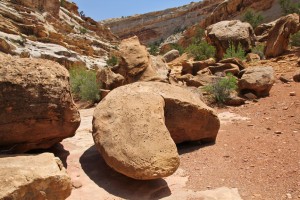 Near the mouth of the canyon, there was another natural arch type structure but we couldn’t decide whether it qualified as a true natural arch. It might be more of a leaning pinnacle. 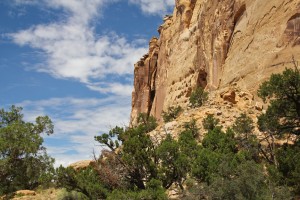 Back on the ATV’s, we continued south to Crack Canyon where we parked at the Wilderness Study Area boundary and started hiking down the canyon. We didn’t really have a purpose for hiking in this canyon other than to just do some hiking and enjoy the area. We found several near slot canyon sections and a few dry falls that had to be climbed. 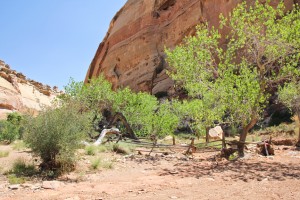 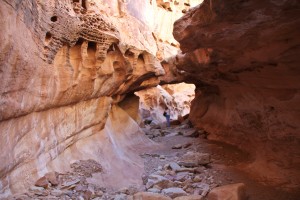 We did find one small class “D” natural arch that we suppose will need to be called Crack Canyon Arch. 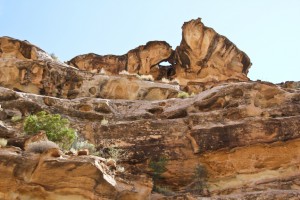 We soon ran into a group of young hikers and soon decided to turn back. (We didn’t realize the canyon was going to get crowded.) We probably hiked a mile into the canyon before turning around. 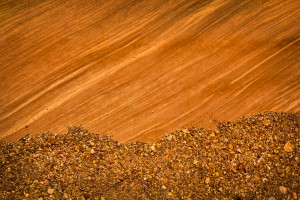 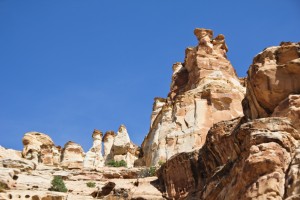 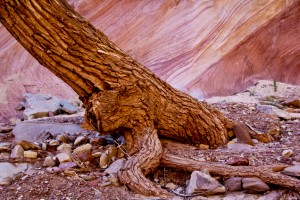 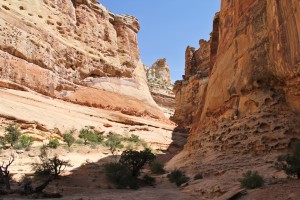 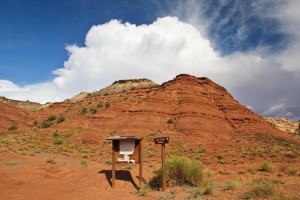 Back on the jeep trail we continued riding south to the next canyon heading east which was Chute Canyon. We drove just to the end of the canyon road where the road had been destroyed by recent flash floods. The clouds were gathering to the west and we didn’t feel like hiking further into the canyon. 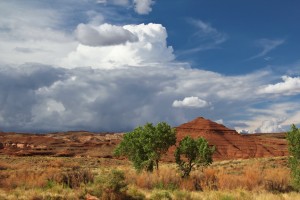 (Warning Note: When you see clouds like this heading towards you, DO NOT enter narrow canyons and washes!)

Instead we opted to take the nearby ATV trail which we discovered was the real “Behind the Reef” trail. 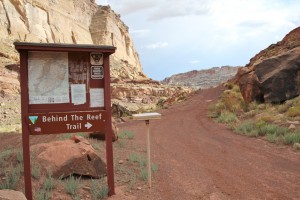 The “Behind the Reef” ATV trail begins by climbing up a steep dugway where fallen rocks has limited the size of vehicles to less than 52″. We had to stop several times to inspect the next obstacle and decide whether it was worth continuing. The sign at the bottom of the trail described both the beginning of the trail and one end of the trail in Little Wild Horse Wash as being extremely challenging. We found the first part of the trail to be exactly so and worried that we might find the Little Wild Horse Wash end even worse. The idea of having to come back that way was a bit frightening. We certainly didn’t have enough daylight to do that safely.

Still we continued and found the trail at the top to be much better. 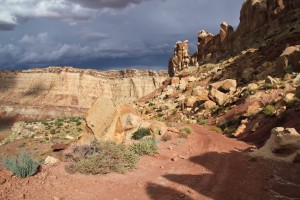 The trail allowed us to continue south to the top of Little Wild Horse Canyon. 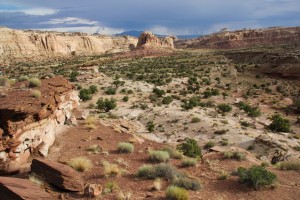 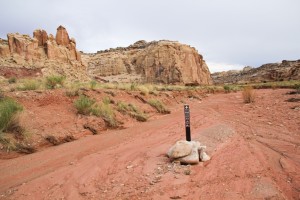 We then back-tracking a ways to hit the Little Wild Horse Wash trail heading northwest and back to the main roads. Black rain clouds were heading our way and we wanted to get out of Wild Horse Wash before they hit. 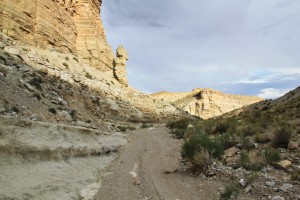 The trail up Little Wild Horse Wash mostly just followed the drainage and went quickly with just a few obstacles from collapsing bank edges. Still it was over six miles before we hit the first dugway out of the wash. While the first dugway was rocky and a bit steep, it was the second dugway that made us clinch our teeth as we powered up the steep and rugged grade. We were glad to be on top and stopped to take a few pictures with lightening flashing in the near distance.

Several miles later, we discovered that we had yet one more dugway to climb and this one was the one that the sign tried to warn us about. It was steep, covered with large, sharp rocks and many obstacles. David was able to climb through the worst section but I got hung up. He had to go clear to the top so he could park his ATV and walk back to assist me. I just hung on with the breaks locked to keep from toppling over backwards. With David’s help, I was able to keep the front end on the rocks long enough to grind my way through. I was soon parked next to David’s ATV and we were both shaking.

Now we were truly on top of the mesa but with storm clouds bearing down on us, that wasn’t really the best place to be either. The rain held off until we finally reached the main road about five miles later. Then there was nothing to do but bear the light rain and ride as fast as it felt safe.

A few miles down the road, we approached some wild horses and I stopped to see if they were going to let me take movie pictures of them. A big black stallion quickly herded them into the cedars and out of site. Nearby I noticed two other stallions watching the proceedings from a small hill. (Wild horse herds are usually run by a senior female but it must have been close to “that time of the year” when the males show up again.)

The rain would be fairly light and then get heavier. At times the rain REALLY hurt when they hit the bare skin and it was borderline cold. (If it had gotten any colder, I would have stopped and put on my jacket. After the heat of the earlier part of the day, it actually felt good.) Soon we had our lights on to see the road which occasionally was washed out by earlier rains. We could see where another vehicle had had problems crossing one muddy wash. Then we came up on a small wash that was currently flooding. The muddy water looked to only be about a foot deep so we plunged into it. We made it through but were surprised to find that it was closer to about two feet deep and stronger than it looked.

Soon the road started to descend off the higher mesa and the rain stopped. It was warmer here and we were soon dry again. Finally we reached the Explorer, having finished a wide loop.

All in all, another good day. And cooler than normal!