I was visiting my brother David in Vernal so we decided to spend the day by driving to Moab and do a little Arch Hunting. We decided to finally locate Magic Theater Arch in Kane Springs Canyon, just outside of west Moab, on the south side of the Colorado River.

It had been a long winter in Utah and it was April before the snow had finally melted and the lower country dried out. On the mountains, there was still huge amounts of snow which wasn’t going to melt until July. So it was good to finally get out and stretch some hiking muscles. 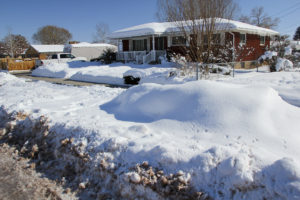 We drove up Kane Springs Canyon for just over half a mile and parked in the parking area on the right side of the dirt road. Here the hike began by crossing the road and heading south along the base of the cliffs until we could hike up the side canyon heading east.

The hike to Magic Theater Arch is only about .8 mile but it is all uphill and steep in places. There is a fairly established trail and it is best to stay with it even when it doesn’t appear to be leading you the desired direction. There are two drop offs that need to be climbed but they are only a problem if you are older gentlemen and you have been sitting all winter waiting for the snow to melt. 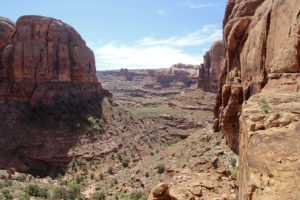 The wildflowers and cactus were in bloom when we took this hike so that really added to the ‘magic’. 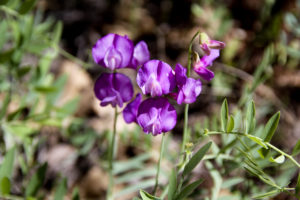 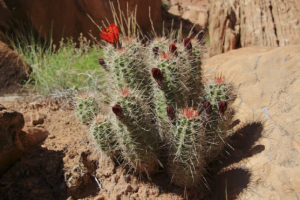 There is only one wash that is hikeable and Magic Theater Arch can be easily found hanging on the left side of the cliffs. This is a nice sized Class ‘B’ sized natural arch and well worth the climb and hike. 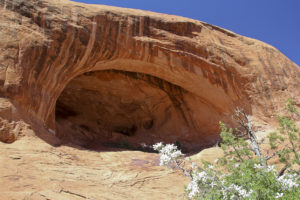 [Note: By continuing up the wash past the arch, you will find yourself overlooking Pritchett Canyon and nowhere to go but back the way you came.]

On the way back, I chose to walk along the cliffs on the west. There were a number of ancient Indian petroglyphs along the cliff walls. Some of them were impressive and many were just doodles. I’m not including pictures of all of them since there were so many. 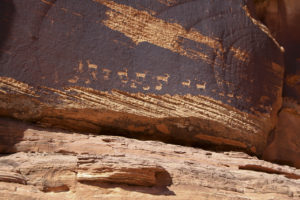 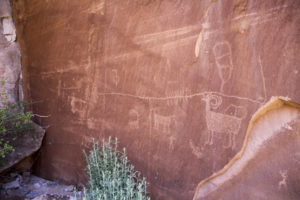 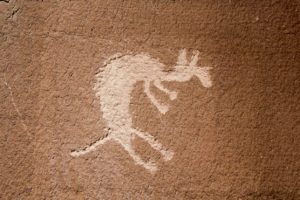 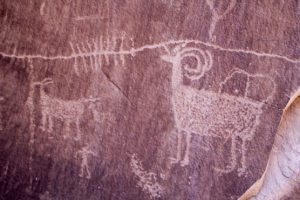 Though it was a late start to the hiking season, it felt REALLY good to be out in the slickrock country again! (Now it will probably turn HOT — too hot to safely hike…)